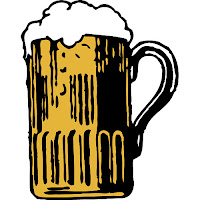 Pheyiyo barked in laughter. Harbek had jostled the group with a hilarious joke. Lidda watched the room, there was glittering gold and elegant jewelry all over the room. Laurenae cut into the chicken breast that was on her plate, gracefully attempting to avoid staining her polished chestplate. Kregor was flipping through a vendor's inventory list, budgeting his gold and planning his future purchases. Patrons of all races drank and ate as the moon rose high in the rainy night. A bard weaved a tale of a mighty dragonslayer called Argus the Solid. He waved his hands as if wielding a sword, slashing through the air in front of the group that was hanging on his every word. Half- orcs sat around arm wrestling and arguing, while elves whispered softly amongst each other. The entire pub was bustling and brimming with laughter and joy, even the tieflings were nudging each other and snickering.
"I don't care what you say," Pheyiyo grumbled, "Argus, 'the Solid', never ACTUALLY killed a dragon." He haphazardly reached for his ale, it's froth almost spilling out of the mug, and gulped it down.
"'Ey, ya don't know what ye' be talkin' about lad! Argus 'er So'lid 'as killed o'er five dragoons,
mate! Ya's never gon' catch up ta 'im, ya dragonborn fool!" argued Harbek.
"Not if we keep sitting around pubs like this!" Pheyiyo slammed his fist against the thick, sturdy table.
"You two need to calm down over there," Laurenae chipped in, "Pheyiyo, patience is key. We have plenty of time to fight more dragons. Harbek, everyone knows Argus the Solid didn't kill a single dragon in his lifetime. That's what Bards do, you know that." She returned to the delicate process of eating her chicken.
"Hey, you think that ol' lady would notice if I took her bracelet?" Lidda was on the edge of her seat, drooling over a ruby studded bracelet that was dangling on the wrist of an old mage. Kregor peered over his compendium at the bracelet.
"If you do," he stated, "could you spare me a few coins? Arryn's shop has this new belt I want, and I only need-"
"Fine, shut up, I'll give you some of my gold!" Lidda snapped.
"No one is stealing from anyone in this pub!" Declared Laurenae to the table. Pheyiyo and Harbek each grabbed a third turkey leg; between the two of them, they practically ate an entire rafter. A shaggy wolf with a satchel cast over it's back wedged it's nose in between the door and the frame, trying it's hardest to squeeze itself in. It trotted over to the table where the party sat and suddenly morphed into the shape of a young woman, not missing a beat as it sat in the open chair.
"'I'll ne'er get use ta you's doin' that, ya crazy shapeshifter..." Harbek's stomach began to churn. He picked up his strong, pungent stout and tried to drown his nerves in it.
"I'll have you know, it's a sophisticated magic that you Dwarves could never understand."
Autumn snidely remarked. She turned to the rest of the party, "Arryn gave me a great deal on this new belt!" She pulled a thick leather belt out of her satchel and laid it on the round table. Kregor's eyes grew wide as gazed at it.
"That's the Ironhide Belt I wanted! How much did you pay for that!?" he cried. The two went on arguing about the belt, Laurenae just shook her head.
"And as Argus the Mighty, Argus the Bold, Argus the Solid brought down his sword sword," Preached the Bard, slashing his hands downward, "The dragon hath fallen, and with a final breath uttered, a single- A final- a cold, harsh word;
'Curse you Argus, you pox on my kin, forever shall you be damned with this mark on your skin!'
And so it was done, with the dragon's last breath, He murmered a cantrip as he felt the cold touch of-" There was fierce slam like thunder at the front of the Pub. Everyone stopped. Some 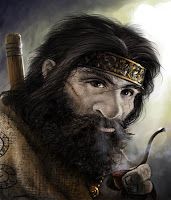 were chewing, their mouths gaping, the food toppling onto the table. A few were drinking their ale, frozen as it slid down their cheeks. All were gazing at the door, which had been kicked open by a silhouetted figure.
The stout, rigged figure limped into the tavern, ferociously scanning the room for something in particular. The adventurers stood, staring at the scarred Dwarf. As he gazed upon them, a cold, sobering shiver ran down Harbek's back.
It was his brother.
Harbek ran to the injured Dwarf, "Calden, what in Moradin's name ar' ya doin' here?"
"'Arbek," the dwarf gasped, "I came... From the Twin Peaks... They... There's an open... Mine Shaft..." He fell to his knees, exasperated from the pain. Laurenae ran to his side.
"Here, let me help." She placed her hands on his chest and leaned in close. A soft blue aura Radiated from her hands and sunk deep into his chest. His scars slightly faded and his fresh wounds closed. It was as if she was breathing Life back into him. She lifted her hands and Calden opened his eyes.
"I be thankin' ya much there, ma'am. Those Bandits in 'er mine shaft made quite a fool o' me."
Harbek helped his brother to his feet. "Now what be this you speak of a minin' shaft? E'erone knows those 'a been closed for o'er ten years!"
"No brother, 'ere be one open in the mountainside!" His deep, raspy voice was filled with angst, "I was up 'ere just this morn, headin' up to the Mountaincart Clan when me eyes be catchin some movins near the ol' Fort Bryn'ill shafts! I's curious, as ya know, and I headed up there jus' as quickly as I could! And wouldn't ya believe it, it was as Moradin 'imself 'ad cleared a path to Fort Bryn'ill. 'Arbek, from Brick to Brick, I be thinkin' it wasn't the Mountaincart clan that collapsed the tunnels all 'ose years past. 'An ya look into it for me?" The party watched as the two argued.
"What is 'ere to look into, Calden? Fer o'er ten years now, all o' us Ironbarrel Clan knows it was the Mountaincart clan that collapsed them tunnels!"
" 'Arbek, I ain't often wrong about me gut feelin's, an' me guts be tellin me that the Mountaincart Clan wasn't the ones who did it! I be thinkin' lately; Even though they be on the o'er side o' the mountain, they still be our brothers! 'Ey wouldn't do damage like what we saw!" Calden's eyes were wide with trepidation. Harbek scratched his thick, scraggly beard and peered over to his friends. They nodded their heads.
"Ay. We be lookin' into it, then." Calden thanked all of the adventurers as they packed their things and mounted their steeds.
As they rode to the mountains, They could begin to see frame of the Mine shaft Calden spoke of.
Posted by aWOLtrooper at 6:34 PM